This preliminary statement is based on reports that the Elections Coordinating
Committee (ECC) has received from 496 out of 498 Rapid Response Observers
deployed to polling places proportionally nationwide as of 5:00PM on October 11, 2017.

The ECC deployed 2,170 trained and accredited observers including 170 mobile
observers and 2,000 polling place observers deployed in all 73 districts. Of the 2,000 observers, 832 are systematically deployed as Rapid Response Observers, 498 of which are deployed based on a proportional distribution by district. This means that the proportion of polling stations observed by Rapid Response Observers in each district and county closely matches the overall percentage of polling stations in each district and county. This proportional deployment enables the ECC to comment on the process nationally, drawing on data points from every district of the country. Appendix A provides a detailed breakdown of the distribution of observed polling stations by county.

On election day, the ECC released a mid-day update on the set-up and opening process. This statement focuses on the voting, closing, and counting processes. Figures reported reflect percentages of polling places observed and do not reflect all polling places across the country but do provide credible and reliable data on the electoral process.

Based on reports from ECC observers deployed to polling places in all 73 districts, Liberians turned out peacefully in large numbers to choose their next leaders and play their part in deciding the country’s future.

ECC observers witnessed Liberians casting their ballots despite challenges. This
includes issues with the Final Registration Roll (FRR), long queues, and polling places that closed at 6:00pm with voters still waiting to vote.

While technical and administrative lapses made this process more difficult for voters, Liberians demonstrated their commitment to exercising their right to vote by turning out in large numbers, enduring the long queues, and peacefully engaging in the polls.

ECC observers monitored the entire election day process in their assigned polling place starting with the set-up and continuing through the counting process and the announcement of the results. They reported using a unique observation checklist and coded text messages to a central database system at the ECC’s National Information Center. 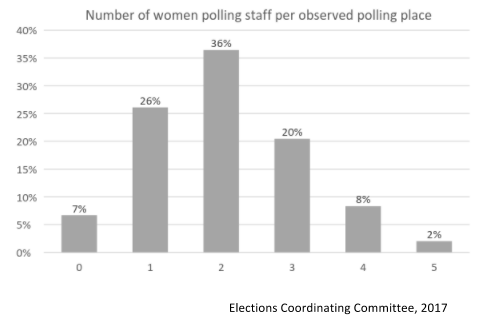 While voting process within the polling place generally ran smoothly, ECC observers reported that NEC staff experienced challenges in managing queues and directing voters to the proper polling places. Particularly in areas with higher numbers of registered voters and in voting precincts located in facilities not adequate to accommodate these numbers, this resulted in long waits and frustration among voters, and caused voting and counting to extend long past the official closing time.

ECC observers noted inconsistencies in how NEC staff addressed the issue of voters missing from the FRR. In 75% of observed polling places with missing names, these voters were permitted to vote; however, voters in 25% of these polling places were denied the ability to vote. 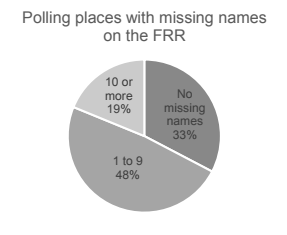 A significant number of polling places remained open past the designated closing time (6:00pm). ECC observes reported that 41% of observed polling places closed after 6:30pm, with many remaining open late into the evening to allow voters to cast their ballot.

ECC observers also noted that some polling places did not have adequate lights, which causes additional delays in the counting process and increases the potential for human error. Furthermore, ECC observers noted that the Record of the Count Forms were not systematically posted on the wall of the polling place after the completion of the counting process.

ECC observers reported the presence of at least one party agent at 99% of observed polling places during the voting and counting processes. This contributed to a level of transparency in the process. 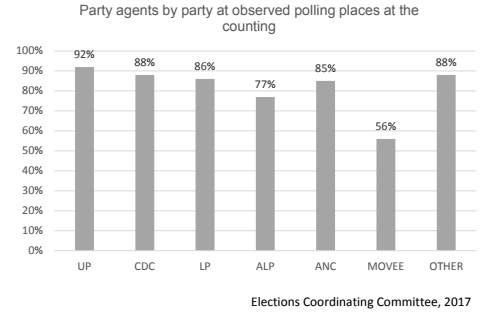 During voter registration and exhibition, the ECC noted the low level of participation of political parties. The widespread presence of party agents in polling places on election day is a significant improvement in political parties’ role in monitoring the process.

To the National Election Commission:

In the event of a second round election:

To political parties, independent candidates, and their supporters:

To the Supreme Court:

To the Liberian National Police and other security agencies:

The Elections Coordinating Committee (ECC) is a civil society platform, comprising 30 organizations that observes all aspects of the electoral process in Liberia, including the 2017 Presidential and Legislative elections. The ECC has an eight member steering committee with representatives from Actions for Genuine Democratic Alternatives (AGENDA); Center for Democratic Governance (CDG); Center for Media Studies and Peace Building (CEMESP); Institute for Research and Democratic Development (IREDD); National Youth Movement for Transparent Elections – Partners for Democratic Development (NAYMOTE-PADD); West Africa Network for Peace Building (WANEP), Inter-Religious Council of Liberia (IRC) and the Women’s NGO Secretariat of Liberia (WONGOSOL). CDG serves as the chair of ECC.

The ECC works in partnership with the National Democratic Institute (NDI) with support from USAID and OSIWA.

Appendix A: Distribution of observed polling stations by county

A daily selection of the best content published on WordPress, collected for you by humans who love to read.

The Art and Craft of Blogging